5 Proven Ways To Deal With A Toddler Saying No

I am just a mom, standing in front of a toddler, asking him to stop saying “No!” to everything from getting too close to the bathtub, to not eating his favorite meal (apparently, that’s SO yesterday).

Is saying “No” considered a normal phase of toddlerhood? Yes. Is willful behavior a sign of positive development and a healthy parent-toddler relationship? Yes. Does it make every mother on the planet want to bang her head hard against the wall every time she has to face (and cope with) the next outburst of toddler defiance? Totally. 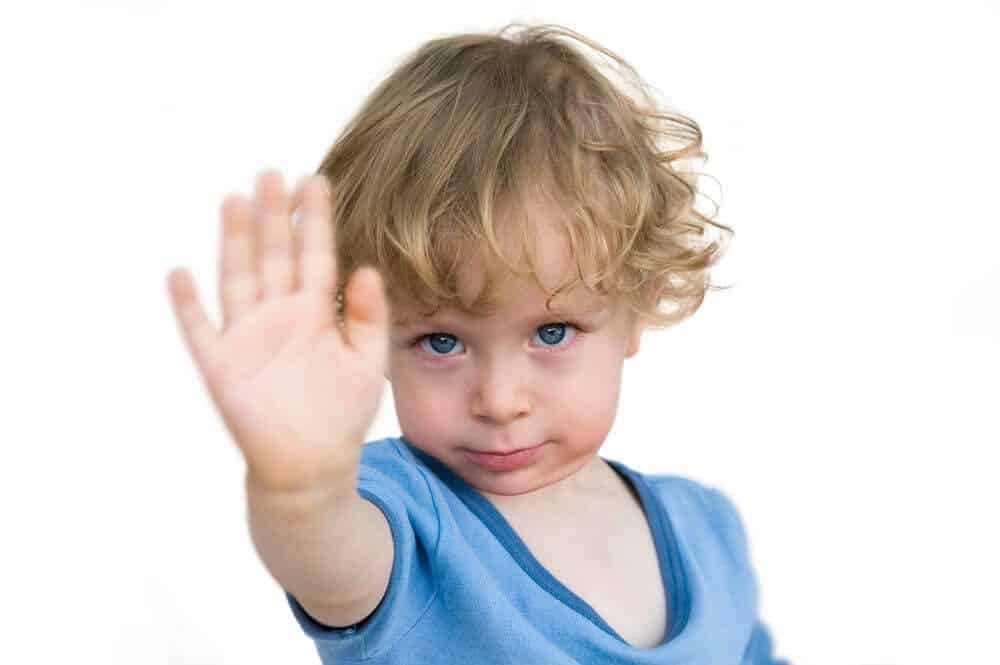 Why do toddlers LOVE the word “No”?

Basically, at a certain developmental stage, each adorable baby turns into a self-assertive toddler who thrives on exercising his free will. He suddenly has a say about everything his favorite word is often “NO.” Why does he say it? Because he can! Unfortunately for us, once he finds out about this newfound free will (combined with freedom of speech), he will fight for it as if his life depends on it.

What are some proven ways to cope with a toddler saying “No”?

When all your attempts to distract your toddler, avoid the upcoming “No” situation, or focusing on the positive side of life have failed, your only alternative is to just stay cool and wait for the storm to come with an open umbrella.

Sure, your toddler has his own free will and it’s OK for him to assert himself. But you are the grown up in the equation so it’s vital that you behave like one. This will give the right signals to your toddler, namely that you, as a parent, have got this under control no matter how much he tries to get you out of your skin. I pretty much  learned this one from the dog whisperer and just tweaked it a bit to work in my mother-toddler situation.

2. Embrace The Power Of Limited Choices

I learned this technique from a fellow mom and saw it in action a few times while my son  was still a baby. Guess what? Todau, it’s my go-to coping mechanism for preventing hourly showdowns.

How does it work? Whenever you see a “No” occasion coming up, take out your limited choice arsenal and prepare for battle. Instead of “Do you want to get dressed?,” offer a choice such as, “Do you want to put on your Spiderman t-shirt or your ?” The beauty of the limited choice technique is that whichever option your toddler goes for, it doesn’t matter! Both outcomes work for you – he will eventually get dressed and you couldn’t care less about which t-shirt he will put on.

3. Have A Yes Attitude

I know this is easier said than done. But the fact is, kids who more often hear the word “No” are more likely to use it more themselves. Finding alternatives to “No” in your speech teaches your toddler that there are other ways to express their feelings and wants. This is more than welcome for them, given the fact that their vocabulary is severely limited at this stage.

Use your calm voice as often as possible (it’s hard, I know) and make sure your toddler hears the words you want him to say later to you. Just keep focusing on the positive and avoid negative words unless the situation really calls for a “No.” For example, when your toddler wants to lick the door of the oven when it’s 400F!

It’s true that not all “No” occasions are avoidable. But it’s also true that you don’t have to take each one as a challenge to outplay the other side. Be a smart mom and let your toddler “win” from time to time – this will help him exercise his will in a controlled environment and, hopefully, help him move on to the next phase of childhood.

I’ll tell you a secret. Every day, I intentionally provoke a situation in which I am sure my toddler will switch to refusal mode. I do this only to let him have it his way at least once a day. The result? A fewer number of showdowns compared to days on which he hasn’t had the opportunity to call the shots. And there are certain things never to say to a toddler.

Being reasonable in the case of parent-toddler arguments means giving reasons for your requests. Whenever you try to convince your little one of doing something, let him know there is a particular reason you want him to do it. This usually makes it more difficult for them to just insist on not doing it.

For example, my toddler wanted to go outside earlier today and make a snowman in the snow. In his pajamas. Instead of just telling him “No” (which would have totally provoked an argument), I simply explained that it makes no sense to me because it’s super cold outside and he won’t feel warm in his pajamas. I even opened the window and let him put his nose outside to see for himself that it’s cold. It worked like a charm.

Don’t get me wrong, I have not figured it all out. At all. I am in the “No” phase up to my elbows and these are 5 techniques that are saving me a few extra arguments with my toddler. I have tried other tactics as well but they didn’t work so well for us. Whatever coping mechanisms you use with your no-saying toddler, deal with the negativity with a sense of humor and keep repeating the parenting mantra, “This, too, shall pass.” It eventually will.

Tina is a work-from-home freelance writer and a mom to a toddler boy who challenges her ability to cope with her household and her freelancing career on a daily basis. She is a firm supporter of gentle parenting, a fan of saving-your-sanity coffee, and a gadget addict. She has endured her share of sleepless nights with her toddler, and as a sleep-deprived veteran, she shares her knowledge on baby sleep on her website babysleep.help.

How To Entertain An Active Toddler

How To Get Your Toddler To Listen Without...

The Best Construction and Building Toys For Toddlers

Having A Toddler While Pregnant: 5 Life Saving...

Ways To Prepare Your Child For Preschool Or...

5 Ways to Occupy School-Aged Children While You...

7 Creative Gift Ideas For Your Man This Valentine’s Day